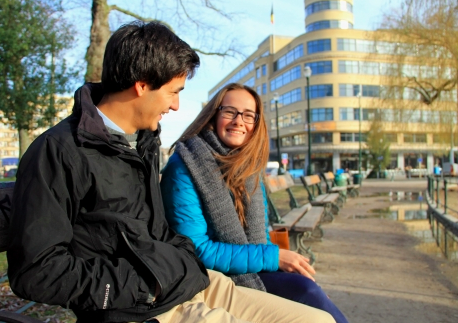 A woman who explains why she fell for her husband,… a girl who lost her job and taught herself to hula hoop, … a couple that needs to decide urgently where to live: those are the stories in « Humans of Brussels », a project by news website brusselnieuws.be.

Three editors of the website take turns looking for interesting people on the streets of Brussels. They crisscross  the city, chatting with people walking by. “Much to my surprise most people want to participate”, says Sara, one of the interviewers. “We try to talk to a variety of people and ask them about their biggest dreams, hopes and fears in life. But people also talk about their family, their greatest passions or work, whatever's on their mind at that moment.” When people have a gripping, original or funny story, the reporter s asks whether they can take a picture and write down their story.

All articles are translated into English, French and Dutch, and can be found on the Facebook page « Humans of Brussels », where a new article is published every week.

Brusselnieuws was inspired by « Humans of New York », a photo blog started by photographer Brendan Stanton in 2010. The blog became a big hit, and Stanton has now over 11,5 million followers on Facebook. All over the world people have started similar initiatives.

The Brussels-based project is not trying to compete but hopes to give an insight into the incredible diversity of people in the Belgian capital. From the Romanian business graduate who is now renovating houses in Brussels, the Palestinian boys who befriended a Jewish girl, to the Dutch man who likes Brussels so much he spends all his holidays here…..

Get carried away by those small stories …