If you are tired of the works in Brussels .... Here is, roughly, what you can expect during the coming months ! 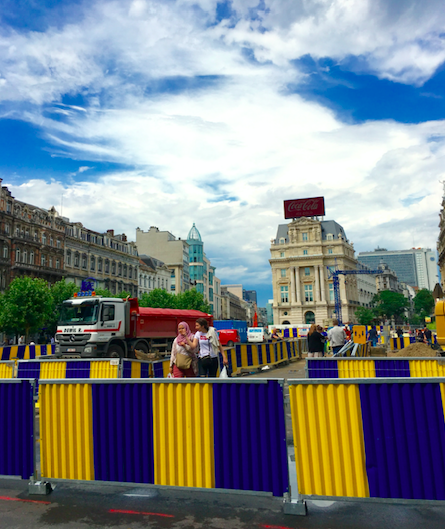 What you should know about Brussels before arriving

Tunnel Léopold II
The Leopold II tunnel reopened partially in September 2018. The tunnel is closed only on weekday evenings (Sunday to Thursday) from 10pm to 6am, until June 30th.This will last at least until 2021.
Google Map

Piétonnier de Bruxelles
The Brussels pedestrian area is still under construction. Work between rue des Pierres and Place Fontainas is expected to be completed in spring 2019 while
the construction sites of Place de Brouckère and the area between rue Grétry and Marché aux Poulets are due to end early 2019.
Google Map

Esplanade Madou
Work between Place Madou and Place Saint-Josse is continuing this summer and should be completed by the spring of 2019. For the moment, rue Scailquin remains under construction.
Google Map

Tunnels Reyers
Renovation of the Reyers Tunnel is still underway. The site is scheduled to be completed by June 2019 and,in the meantime, the two E40 tunnels from and to Montgomery and the Meiser tunnel to the E40 are closed to traffic until the end of March 2019.
Google map

Tunnel Porte de Hal
The work of the Porte de Hal Tunnel continues: if the tunnel is no longer closed during the night, the work continues and should be completed at the beginning of the year.
Google Map

Rue Lesbroussart
The street is still under construction following the replacement of tram rails. The road is still closed locally by zone. Deviations are in place until March 2019.
Google Map

Porte de Ninove
The roads of the Porte de Ninove are presently being renovated. The work will continue until November, at best. The work on the park must be finished by the end of the year.
Google Map