Shopping arcades of yesterday ... and still in activity! 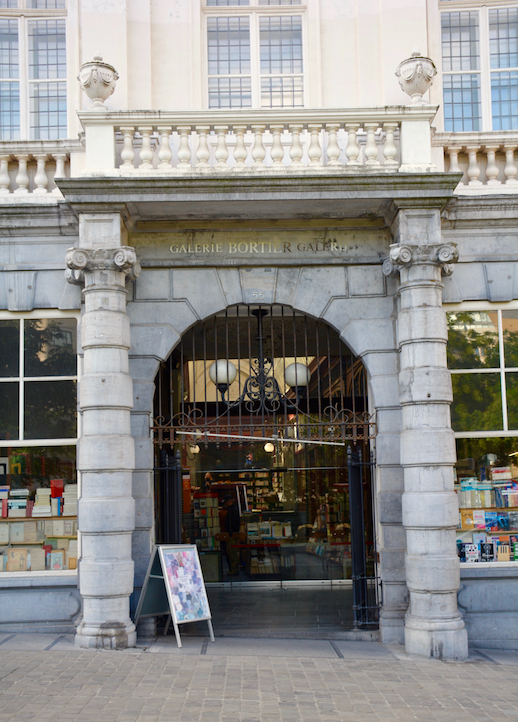 Shopping arcades appeared in Europe at the beginning of the 19th century in the form of urban concentration. In Brussels, these galleries emerged from 1846-1847.  They facilitated the development of shops, rooms of all types and accommodation in the same covered space, luxurious in our country which is subject to the vagaries of the weather.

What appears obvious to us today, but which was innovative at the time.

And then, there are the galleries which have disappeared. From la Galerie du Commerce (sometimes called Galerie Hirsch)(1871) which was once a continuation of le Passage du Nord: a small section still remains, in the process of reallocation, between la Place des Martyrs and la Rue d’Argent.

When you enter Les Galeries Royales Saint-Hubert (1846-1847) you take a leap in time in Brussels’ history to end up in the first half of the 19th century. You cross la Galerie de la Reine, la Galerie du Roi and la Galerie des Princes. The architect Jean-Pierre Cluysenaar designed the pedestrian crossing to bring light and space there in the building of divers styles (overlapping of styles: Toscan on the ground floor, Ionic on the first floor and Corinthian on the second) comprising three apparent levels.

Les Galeries Royales Saint-Hubert are full of history: place of exit to Brussels, for the French escaping the regime of Napoleon III, among whom was Victor Hugo.  Other famous persons having walked this route : Baudelaire and Verlaine (he bought a revolver which he used against Rimbaud).  A sign is a reminder that in la Galerie du Roi a cinematographic projector was used for the first time in Belgium by the brothers Lumières at the end of the 19th century.

Since its beginning, the Gallery has combined a place for walking, shop windows, often specialised, and for the most part, prestigious (the chocolate people Neuhaus since 1857, the leather goods people Delvaux, the bookshop Tropismes..) the dynamic cultural centres and avant-garde (théâtre royal des Galeries, cinema des Galeries) and, upstairs, apartments still greatly prized today. The atmosphere of these Galleries remain elegant through time.

With its 70 metres, le Passage du Nord (1881-1882 : work of Henri Rieck) connects the Boulevard Adolphe Max and the Rue Neuve. It is really worthy of interest because of its grandeur, its architectural complexity and its many statues.

In the past, the Galerie already welcomed a number of shops on the ground floor. On the first floor, one finds a number of rooms like “Buffet-Restaurant”, “Jardin d’hiver”, “Salle de lecture”, “Salle de conférences”, “Salles des dépêches”, Salle des Curiosités” et Antiquités”…Many shows (Chinese shadows, magic..) are all there.  From 1888 to 1895, a museum (Musée du Nord) of wax figures were also there.  Since 1908, the entire museum closed its doors and is a part of into the Hotel Métropole, direct neighbour of the Passage du Nord. 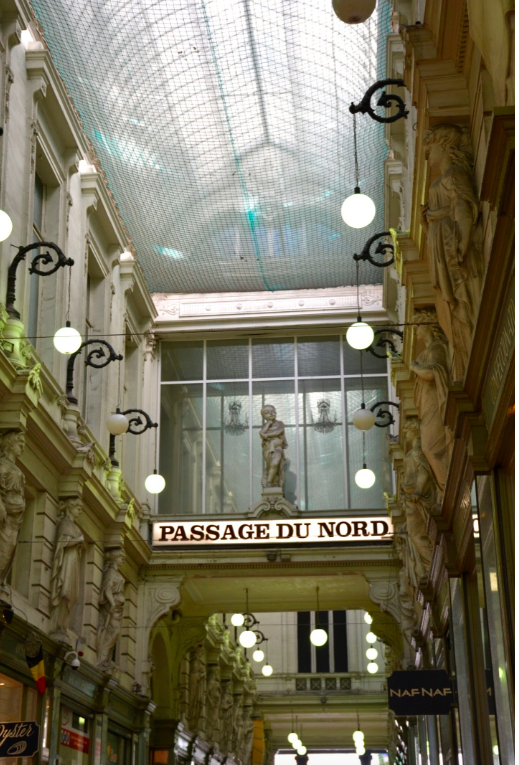 Today, vital forces in society get together to preserve this end of the 19th century site. When you go into the internet site it contains a presentation of the Gallery and gives the addresses of different shops which are there.

Built in 1848 (J.P. Cluysenaar) in the place of the old post offices??/delivery services (Van Gend) from where the stage coaches left for all of Europe. The façade of the coach entrance remains, where to our astonishment, we notice the year of 1763 at the entrance.

The Gallery, which forms a curve, surrounded what used to be the market of la Madeleine. La Galerie Bortier, more modest than les Galeries Saint-Hubert, has two levels.

To walk there is charming. The collector of old books will find what he is looking for there between second-hand booksellers and other shops selling rare books. Take time to wander around and to search/rummage*, you will experience a real leap backwards in time. 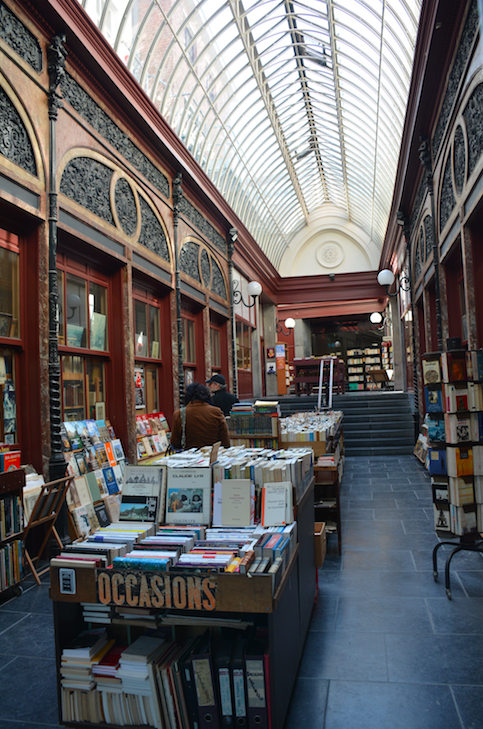 Next weeke: Shopping arcades of yesterday