On December 10th at 11 a.m. you are invited to the inauguration of the illumination of Square Armand Steurs (on the border of Saint-Josse-ten-Noode, on the boundary of Schaerbeek, Bus 61 – bus stop Steurs). You can drink hot wine while listening to special music.

Furthermore, you can admire the fir tree in the square with shining lights until January, 10, 2017.

Armand Steurs’ Square was inaugurated on July 3, 1932, in memory of the Mayor of Saint-Josse-ten-Noode (from 1885-1899). He was the President-Founder of the Compagnie intercommunale des Eaux of the Brussels’ agglomeration, now called “Vivaqua”.  Consequently, drinking water from the Bocq Basin (province of Namur) is routed to the suburbs of Brussels (Saint-Josse-ten-Noode, Schaerbeek, Ixelles, Saint-Gilles, Auderghem, Koekelberg, Uccle, Watermael-Boitsfort and La Hulpe).

The « ten-noodois » architect, Eugène Dhuicque (1877-1955) provided the design. It relates to a square with two levels, characterised by four landmarks:

- the golden sculpture La Source of Julien Dillens (1849-1904): creator of another well-known work, t’Serclaes in the Grand Place of Brussels), in reference to the Bocq waters and the sculptural group of the Carriers of Guillaume Charlier (1854-1925: see his museum in Saint-Josse-ten-Noode).

- The scheduling of the plantations was entrusted to landscape-architect Jules Janlet (1880-1973).

The square has suffered from the ravages of time and benefitted in 1984 from a huge renovation.

Having found its glory of yesterday, the square has become a dynamic place, ideal for cultural, musical and classical dance shows as in the past, exhibitions of monumental sculptures, today. They aim to connect youth, patrimony and the world of art.

As a preview, this summer in the square : The exhibition of the monumental sculptures.
We will speak again about this next year on the occasion of its  25th edition. 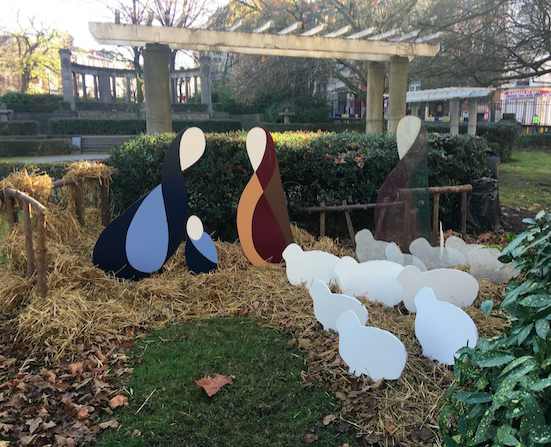