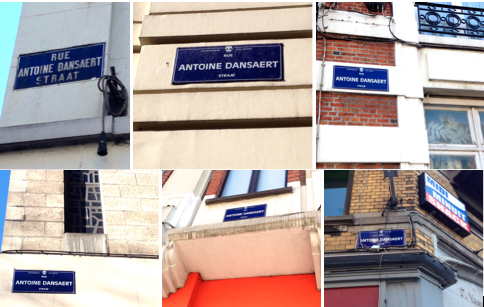 The area of Dansaert is like a microscopic village in our « small » Brussels. The “rue Antoine Dansaert” dates from the beginning of the 19th century.

A little bit of history: From the 19th to the 20th century, the west of the Brussels’ pentagony developed industrially: breweries, printers, paper mills, clothes factories.. In the absence of transportation and because of the difficult working conditions, the workers’ families preferred to live near their work. They were all crowded into a courtyard and in unhealthy alleys. But the health movement of the 19th century brought measures of “urban sanitation” due to the fear of epidemics.

Replace these obscure streets of the workers’ quarters by large avenues, bourgeois buildings, townhouses and apartment buildings. The Dansart quarter has therefore become elegant and very rich compared to its beginnings.

Today it is a hyper trendy and dynamic place. It is here where artistic creation is in full swing. Stylists, designers, jewellers, milliners, gather in this area to offer you unique clothes and of superior quality.

The most popular  street in the area is « Antoine Dansaert »…but it is not the only one ... (next article)!

The temple of international design with its spectacular windows.

This is the tea boutique for experts.  One finds there a selection of unique teas. Tea tasting events are organised on appointment.

The mythic bar of Brussels. The ideal place to listen to jazz music and at the same time to savour one of the many whiskies available at the bar. Each month L’Archiduc brings artists for exceptional live concerts.

For a delicious couscous in a decor of a thousand and one nights.

International  centre of  literature in Brussels, multilingual. Organises a number of events, meetings and workshops.

Chic and sleek clothes shop in the style « American loft ». The plus : they also sell all the furniture which is there…

A 1900s house completely renovated with a fashion ambiance in its tastefully decorated twelve rooms.

A superb place for the store-concept created by a Belgian.  There you’ll discover all men's , women’s and children's fashions and also the favorites of the “house” such as accessories, books and world objects.

An « Art Déco » boudoir by the Belgian, Carine Gilson. She offers, exclusively, her line “Lingerie Couture” for top and  bottom in natural silk, mousseline and chantilly lace.

For shoe addicts, the Brussels’ boutique where you can find a very big choice of big shoe designer collections.

This boutique offers a suprising collection of glasses.